So I last left you when I was told to grab my stuff and meet my leaders outside, they led us into the wilderness and stopped at our camping site and told us simply to ‘make a shelter’.

Well thank-you God, kathy did a crash course the day before on outdoors survival! We had only rope, tarpool, matches, a contraption to make fire with, cups, spoons, a can opener, a big bottle of water.

And with only these items kathy was able to create a wonderfully cosy shelter!

After completing making our shelter we were taken to an opening in the forest, over looking a cold Welsh beach .

We were quickly informed of the task at hand, good news is we get dinner, bad news is two people are gunna have to get into the water swim to a far(ish) boat ( in said super cold Welsh sea water) and then swim back to shore without once dropping the food…

I looked around at other groups debating on who should go, basing their decisions on sensible things like who has the most ability who is fastest ect ect.

As we were about to begin our group analysis our leader Josh enlightened us to his decision to pick the two girls… Much to my horror.

Thus me and kathy begrudgingly made our way to a makeshift tarp oil changing room and resurfaced in old clothes kindly provided by min-y-don.

Thankfully we were allowed to wear life jackets. As predicted the sea was ice cold and as we approached the boat it became increasingly harder to keep a steady pace with the cold biting at you. Kathy made it ahead of me and retrieved the food then she encouraged me as we swam back to shore! We retrieved our food which was dry pasta and some rice pudding and we brought some tomato soup from a task we’d done previously.

we went back shared it and ate it, then chilled with our leaders. This was when we realised they were human too and not just the meanies trying to push us over edge! When most groups had fallen asleep we were still up, our leaders had left for a while and came back to collect us for an unknown surprise task. Thank goodness we didn’t fall asleep!

We then had to sit in the tennis court and complete a puzzle (some groups were made to do this many times) and the we embarked on a walk. We walked with just a map with simple instructions like ‘when you see a gate turn left’.

Everything was pitch black and we could only use one torch, our leaders pointed out the sky, and it was absolutely majestical. The sky was littered with stars, I’d never seen a sky so unpolluted with light that I could see the stars so bright and so clear.

After the walk we headed back (some leaders made their team do it more than once ) but we were lucky ours were tired!!

We slept the night peacefully under our little twilight shelter and that concluded our little adventure.

Here are some other pics of things we did after that in min-y-don! 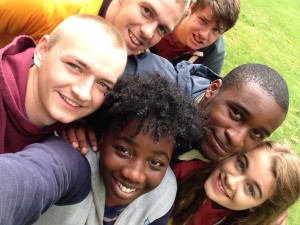 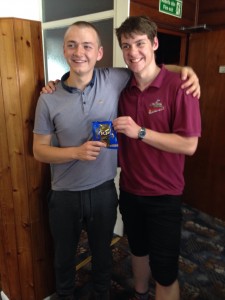 This last picture represents the re patching of Richards relationship with Josh (one of our leaders). You see Josh in an attempt (which he was almost successful, but Richard held it in) to annoy Richard ate Richards crisps.

Now we know never come between a man and his crisps!!